Holy crap it's been an eventful year. This list is longer than any of my previous lists. It's been a good year, I've had a lot of different experiences and done a lot of 'living' to make up for the lack of it during uni.

1. Started my own business as a fully qualified Naturopath!!!
2. Officially graduated and received the Dux of Naturopathy award (kind of like valedictorian)!!!!
3. Created and launched (two days ago!) a website and blog that I'm very proud of. I did all the design, layout, content, etc. myself, and I am really proud of the way it turned out (www.sweetvioletchamomile.com).
4. Began and ran a Facebook page for my business.
5. Hired my first web and graphic design firm to make a one-page website for my business.
6. Faced my fear of networking and made some connections.
7. Actually consistently made people's health better, which is the best feeling.
8. Had just over 100 consultations for the year.
9. Found my feet in practice and found my own style of approaching treatment.
10. Gave my first talk on health-related things, which was terrifying but I felt really proud of myself by the end.
11. Designed and printed my own business cards.
12. Did free health checks in the community.
13. Started Kevin Doherty's 'Your Best Year Ever' program to kick-start my business.
14. Wrote and submitted my first financial proposal.
15. Said goodbye to my beautiful Killy.
16. Adopted Fish and Chips.
17. Celebrated my 8th anniversary with Pete.
18. Went on a LOT more dates with Pete, probably more than we've been on in the last few years combined.
19. Challenged my agoraphobia by going on a 6-day trip to Brisbane, which, although it was hard in the beginning, I completely took in my stride.
20. Gained 3kg.
21. Joined a choir and sang at my first concert in many, many years.
22. Sang at a carols concert with my choir in front of thousands of people.
23. Fell over on the road and messed up my right knee, which now also has a huge, ugly scab-like scar on it. It's OK, it's just super sensitive so I'm unable to kneel at the moment.
24. Consistently had a two-day weekend for the first time in years, which was totally magical.
25. Attempted (and did not win) Nanowrimo for the first time in years.
26. Attempted (and did not win) Napowrimo for the first time.
27. Finished work at BodyActive Therapies for good.
28. Read about Zero Waste and started integrating it into my life.
29. Did a major declutter.
30. Cut my hair short, which I regret. I always regret it. I need to remind myself of that fact next time the urge to cut it short comes along.
31. Saw Wicked! Which was awesome!
32. Hired an awesome cleaner and gardener which has made life so much easier.
33. Kept up correspondence with my new penpal, Lucie. Which reminds me, I owe her a letter.
34. Had a professional styling and shopping session, which is an experience I won't repeat.
35. Finally got diagnosed with Vitamin D deficiency, which is something I've suspected for a while.
36. Bought a down coat which has completely changed my relationship with winter. Ha!
37. Bought a new Macbook Air as my work laptop (but which I use as an all-purpose laptop, let's be honest).
38. Attended Pete's sister Jennie's wedding to her lovely husband, Greg.
39. Cooked beef for the first time.
40. Remarried myself.
41. Missed Christmas for the first time because I was sick. Womp womp.
42. Turned 30.

Lots of people swear by choosing a focus/key word for the year, and I've never found it all that useful. That said, the word that really stands out for me for 2015 is self-discipline. This year has been all about being lenient with myself and allowing myself to place my personal life above my work life. I've taken it easy a lot, and I think that was important. But now it's time to buckle down.

marchland, because it is love. if you want to be part of an amazing community of women who have your back, you should consider applying. it's one of the best things i've ever been part of, and one of livejournal's best kept secrets.

eta 07/10 i've since found out that this isn't a true buddha quote. it's a good point nonetheless!

if they'll have me.

bleedingbeauty_ has changed its name to

marchland, but it hasn't changed its focus: it's still all about thirty women working together to become the best they can be. you should apply, it will be one of the best things you ever do for yourself.

i'm reapplying to bb_ because i missed having a bunch of growth-focused women to bounce ideas off. you should try it.

i am completely obsessed with tori amos's 'that guy'. it is completely beautiful and completely chilling.

That Guy - Tori Amos
That guy swears he will walk
And carries a chip as big as New York
That guy
At night makes me scream
And smashes the best possibilities
That guy
Just brings his war home, she cries,
Why can't daddy leave his war outside?
That guy
When he wants can love
Like no other love
Until the darkness comes 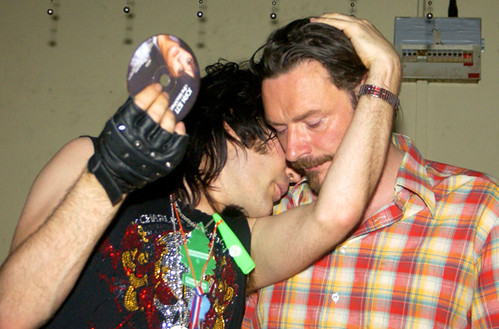 this morning was the inaugural meeting of the writers' group i've been wanting to get together for ages. we've decided to call the group bird by bird, after a book of the same name about writing. i'm excited. there were four of us: eleanor, myself, maddie and maddie's friend from the voiceworks editorial committee, sam. i wasn't sure whether sam would turn out to be male or female, because maddie and i had only ever talked about him over facebook message, and i don't think gender pronouns had been used. i am kind of sexist, so i was apprehensive about him being there to begin with, but i got over it quickly when he turned out to be nice. it's always the way.

we met at the acmi lounge, had food (a croissant with even more butter, and blueberry jam! yum) and drinks, and talked about life and writing. it occurred to me that i've never read a book on writing. maddie recommended the aforementioned bird by bird, and also stephen king's 'on writing'. i would really like to get in touch with my writing self again. i need to build writing into my daily routine.

we were meant to bring stuff in to workshop today, but i think it was more of a get-to-know-you thing. eleanor had brought something, but decided not to share it because she would have been the only one. i want to finish a first draft of my transspecies cat person story for the next meeting (in about a fortnight).

we have homework, which is we have to try sitting quietly for 15 minutes, without doing anything at all. we're not allowed to look at anything, lie down, read anything, watch anything, etc etc. this is supposed to connect you with your mind and your thoughts and allow ideas to surface. i realised recently that i am very rarely alone or silent, so this should be an interesting exercise.

if you're reading this, and you're in melbourne you are most welcome to come to the next meeting, it's open to everybody. only we're trying to keep it small, less than half a dozen people at a time.

after we parted ways, i walked eleanor to her car. she is an amazing creative type and talking to her and hearing her ideas and creative pursuits really helps me reconnect with that side of myself. i think it's important for me to surround myself with writers and artists, because i'm usually surrounded by naturopathy students and programmers. lovely people, but not bursting with the kind of creative energy i feed off. like an energy vampire.
Collapse